After the exhausting day housebuilding, we headed south for Pisco. Pisco centre is a nice town, with a bustling atmosphere. Our hotel was comfortable for the night near the plaza. We left early in the morning to get the 10am boat to the Islas Ballestas. These islands off the coast of Peru have wonderful wildlife. On the way we had a good view of the Nasca candelabra, before heading out to the island themselves.

There on the islands, Humboldt penguins nested alongside pelicans and other seabirds. Sea lions lounged in the sun, draped across the rocks and large red crabs scuttled into crevices above the waterline 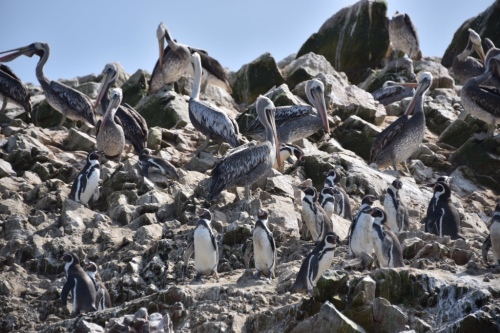 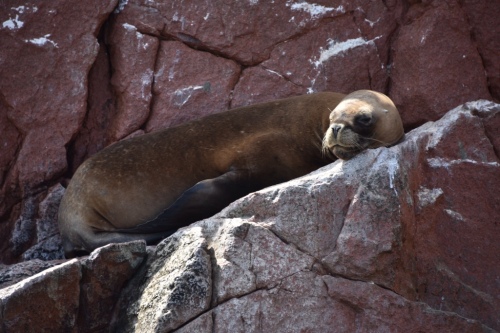 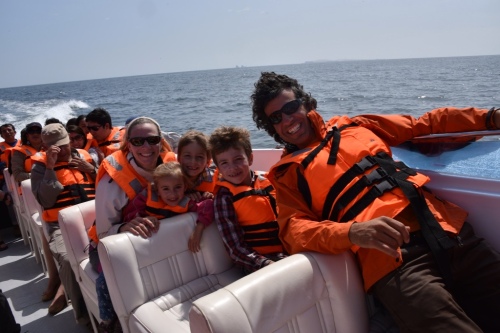 We joined the Pan America highway again. A black strip of bitumen across the brown desert sand and dust. The monochrome landscape was broken by bright green valleys where oranges and other crops are grown in defiance of the lack of rainfall with the water that flows down from the high Andes a long way inland.

We stopped in the tourist trap of Huacachina – an oasis in the sand dunes. Here, sunset viewing and dune buggy driving are the order of the day. 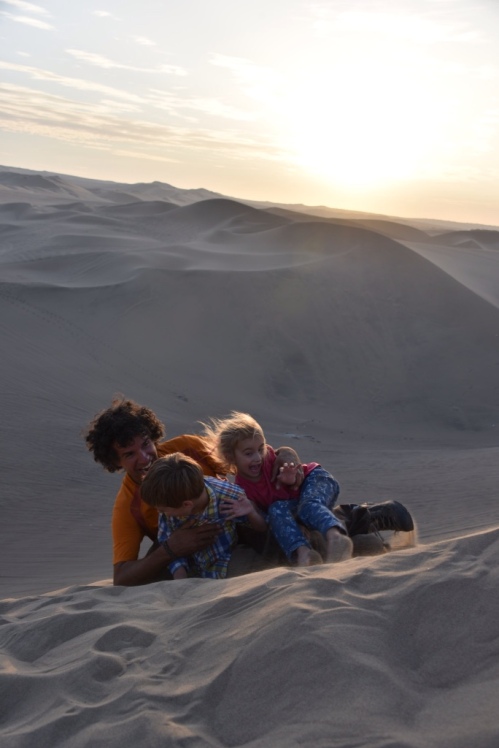 Still shaking sand out of everything, we headed south across the dry landscape. At Palpa we climbed a tall rusty rickety lookout structure to view the pre nasca shapes on the hills. The stairs some 15 up were sloping alarmingly outwards, and the rusty joints gave little confidence… 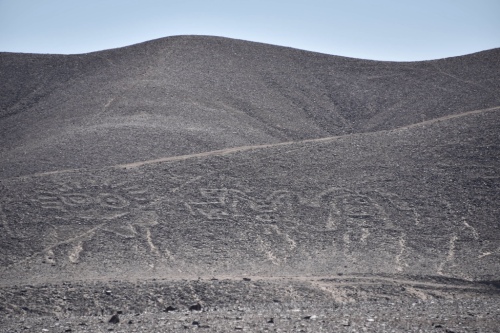 An hour later we arrived in Nasca and ended up staying at the Hotel Algeria, a lovely atmosphere, large garden area, and parking out the back. It was $75 USD for a good clean room. The front is secure and was frequently locked as the twice daily political demonstrations made their noisy way down the street. WIth the approaching crowd, everybody rushed to lock their front doors, but stood outside to watch. Clearly, it`s something that could go ugly very easily.

Of course Nasca is famous for the Nasca lines, mysterious figures and shapes carved into the landscape, and the only way to see them well is to fly. We ended up flying with Air Paracas, the following morning and enjoyed the flight. They appeared to be a very professional outfit, even the weight and balance was computer printed out before the flight. I have a feeling that a few years ago things were a little more haphazard, and the authorites have come down pretty hard on the operators with some heavy regulatory oversight to keep the tourism industry alive. 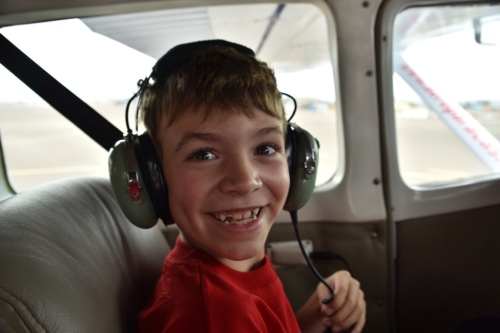 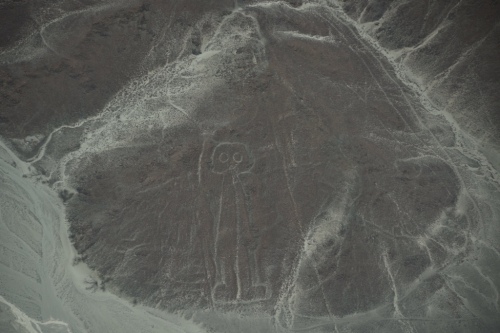 We had been on the go for a few days, and decided to have a quiet afternoon around the pool after the flight and stay an extra night at the hotel.

The following morning we explored the old aquaducts built by the Incas and are still in use today. Cerro Blanco, the largest sand dune in the world towered in the distance.

At lunchtime we headed off into the coastal mist and murk. The sandy coastline was punctuated by mountains. We took a side trip down to Puerto Inca, the site of an old inca settlement. We explored the northern shores and happened across a couple of human skeletons. One was of a child about Xavier’s age. Given the rubble around it, it looks like it was unearthed in a recent earthquake. Fragments of cloth in which the body was wrapped were still visible.

Further southbound, the road wound its way high above the ocean – off the edge was straight down with no crash barriers.

It was getting dark and when oncoming trucks were deciding that my lane was fair game on precipitous hairpin corners, we decided to get the next accommodation we could find no matter what. We happened across a small hospedaje in the town of Ocoña for $12 a room that was perfectly adequate for us.

In the morning, the misty drizzle continued along the coast, where we headed inland to begin our journey to Cotahuasi canyon.